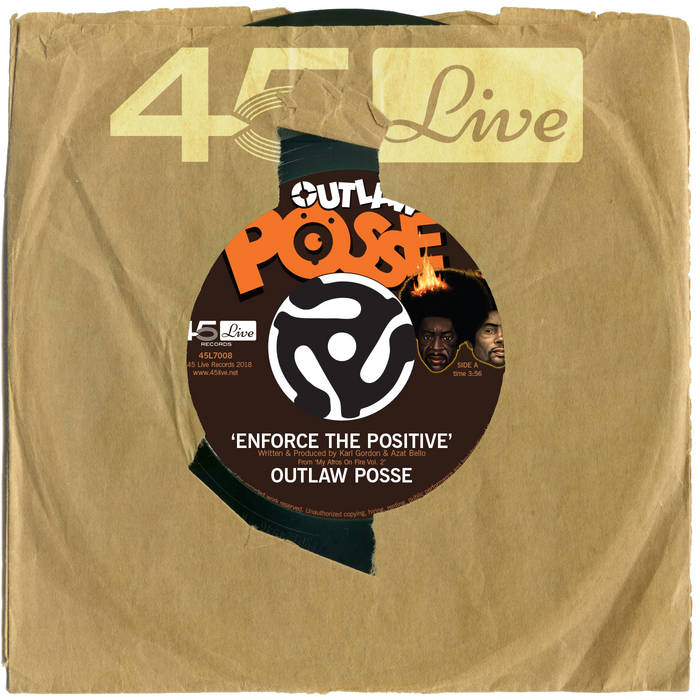 “Rewind to 1990, the place was Bristol, and as a young musician playing in jazz/funk bands, I travelled up from Devon to go and see a live show by The James Taylor Quartet and The Brand New Heavies with support from Outlaw Posse. I was there primarily to see the funk bands but what I came away with that night was that Outlaw Posse stole the show! Their début LP ‘My Afros On Fire’ had just come out, and I was introduced to their unbelievably funky and jazz flavoured boom bap hip hop at the show, it really did blow my mind. After their fantastic set, the Brand New Heavies came on (still in their funk days rather than their later disco/pop flavour), and then after a number of songs, Outlaw Posse came back on to rap with them, and right there I experienced a life changing moment. The combination of Outlaw’s blistering set and then the BNH with MC Bello B pretty much drove me into the direction of DJing, hip hop, jazz, club promotion and a life being seriously involved in music. I picked up my copy of 'My Afros On Fire' at the show and it still remains one of my most favourite hip hop albums of all time, so to put this new record out some 28 years later is a personal joy of the greatest kind”
Pete Isaac

The early 90’s is generally referred to as The Golden Era when it comes to hip hop, and rightly so. It was a time where sublime creativity - fuelled by the limitless sampling opportunities before the lawyers gathered steam - fused with positive attitudes to produce hip hop music that was rich in musical gravitas whilst enforcing messages of love, political empowerment, social commentary and above all fun! Over in the USA, groups like De La Soul, Gang Starr, ATCQ and the like brought jazz firmly into the fast evolving hip hop stew, mostly grabbing all the headlines, but over in the UK there were some trailblazing crews too with Outlaw Posse definitely up there as one of the pioneering few. Outlaw Posse’s début album ‘My Afros On Fire’ (1990) dropped in the same years as Gang Starr’s masterpiece ‘Step In The Arena’ and ATCQ’s phenomenal ‘People's Instinctive Travels And The Paths Of Rhythm’, with all of them achieving spectacular results with their clever and intricate use of use of samples and positivity in their raps, it was indeed the original dope.

Skip forward to 1993, and Outlaw Posse record the equally brilliant ‘My Afros On Fire Vol. 2’on Gee St / Island Records which was due for release but after some difficulties with the label they decided to part ways, and the album was sadly shelved. Kgee then went on to produce All Saints whilst MC Bello B went on to write for the KLF as well as working with various groups like The Young Disciples, Mica Paris, Damage, Carl Thomas, Push, Nexus and many more, the guys sure weren't sitting around. And now in late July 2018, that lost album is finally coming out digitally directly from the guys via their Bandcamp page. As soon as we heard about it we immediately got in touch to show our respect and love and ask if we might be able to do a 7” single taken from it, and they said yes! So cue up 2 absolutely banging jazz soaked dancefloor bombs, pure boom bap, pure gold.

Outlaw Posse consists of Kgee & Bello.B the two met each other at Henry Compton Secondary School in West London and realised they both had a passion for hiphop.They started putting tracks down in Kgees basement from the age of about 14.Anyway as the story goes Bello.B met the infamous Richie Rich at Spin Off Records and after hearing their demo advised them to come and record at Gee St Records. ... more

Bandcamp Daily  your guide to the world of Bandcamp